It is several months since as many as 75 people met in Chudleigh Church to worship, but thanks to careful preparation and direction from Clare Lillington and Alison Phillips, everyone who wanted to come to the farewell service to mark Vicar Paul Wimsett’s retirement on 9th August was able to do so. 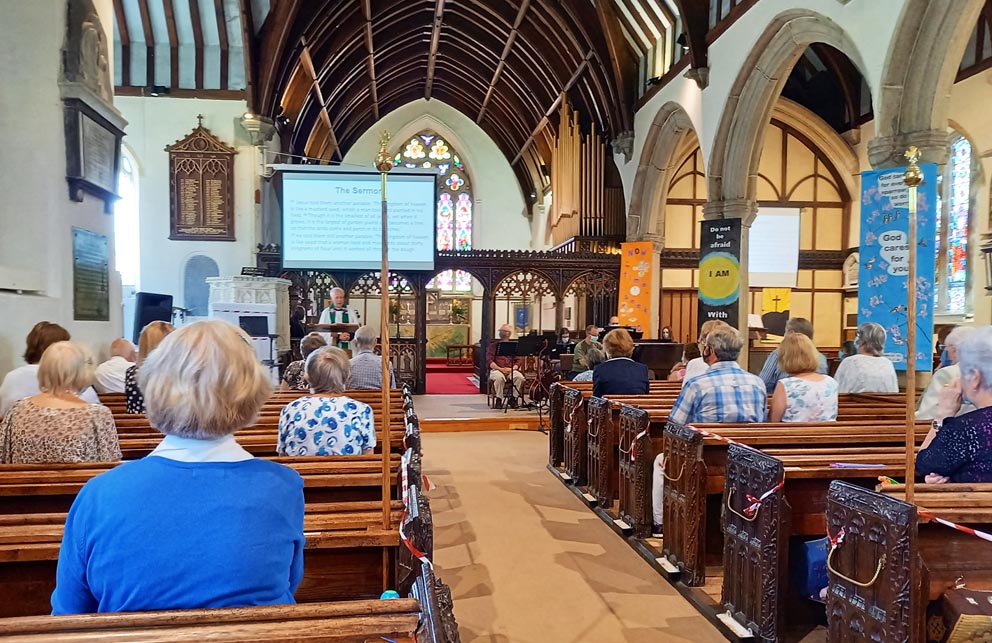 The service looked back over the 21 years that Paul has been Vicar here, and Fiona and their daughter Naomi were there to share the occasion. Paul had chosen some favourite hymns, and said he had mixed feeling about choosing them to be played at the service – music can be very moving. Unfortunately, we were prevented from singing them by the current restrictions, but there were several to clap along to, and we were allowed to hum! Fiona’s choice, Guide Me O Thou Great Jehovah, was played with such enthusiasm by organist Steve Cox that you hardly missed the singing! In fact, Paul suggested that Fiona might have been bribed to include this hymn … by whom, I wonder? (Welsh organist, Welsh hymn…?!) A favourite from Paul’s choirboy days in Kent was also included – All Creatures of our God and King – as well as Easter hymns because we were prevented from sharing them at Easter this year, which fell during lockdown.

Naomi’s experiences working at Lee Abbey were also included, when we watched a thought-provoking video Reflection, Mary, Did You Know?, featuring three young people from different countries who had also worked there.

The service reached its end, and the time came for thanks and presentations. Fiona and Naomi came and joined Paul at the front, and churchwarden Clare Lillington expressed gratitude and appreciation on behalf of us all. Just in front of the pulpit was a mysterious large object covered with a dustsheet. The mystery was solved when Paul pulled off the sheet, to reveal a bookcase made by Richard Pearce out of a surplus church pew, to dimensions provided by Fiona – very useful to hold some of the books that Paul will now have the time to read, in his retirement.

Next George and Alice Farrell presented Paul with a card on behalf of Chudleigh School, and then Margaret Atkins made a presentation on behalf of Moreton Deanery, in recognition of the time that Paul spent as Rural Dean. Andrew Parkinson had prepared a large card with a photo of Chudleigh on the front that has been passed around and signed by everyone, which Clare gave to Paul next. His main gift from us all is a set of patio furniture – now that he will have time to sit in the garden! Fiona and Naomi were not forgotten either, with a basket of flowers for Fiona presented by Jenny Brandon and a gift to Naomi by Phillipa Gale. Steve Cox emerged from behind the screen and gave his appreciation of Paul’s time in Chudleigh, saying how much he had valued their relationship over the years.

Paul had a presentation to make too – flowers to Clare, thanking her for all her hard work as Treasurer and Churchwarden. One last gift from Nii Tackie-Yaoboi – a Ghanaian shirt – in recognition for the support that Paul has given to the Akuapem Hills School that Nii founded in Ghana – and it was time for You Shall Go Out With Joy – another song to clap along to. Paul and Fiona walked down the aisle – and the congregation kept clapping at the end of the song, all turning round to face Paul as he stood at the back. When (eventually) the clapping died down, Paul dismissed us with “Go in peace to love and serve the Lord”. We all replied “In the Name of Christ, Amen” and the service was over.

There was the opportunity to say a few words to Paul and Fiona outside. It was an unusual farewell service, with masks and no singing, but the guidance had been changed shortly beforehand, so that Paul and readers etc did not have to wear a mask at the front, which made it better.

We all wish Paul and the family well as they move to Teignmouth and hope that he will enjoy a well-earned rest in retirement (although Paul did have a funeral to take before leaving) – although retired clergy are not allowed to rest on their laurels completely, so I imagine that he will find he has plenty to do! 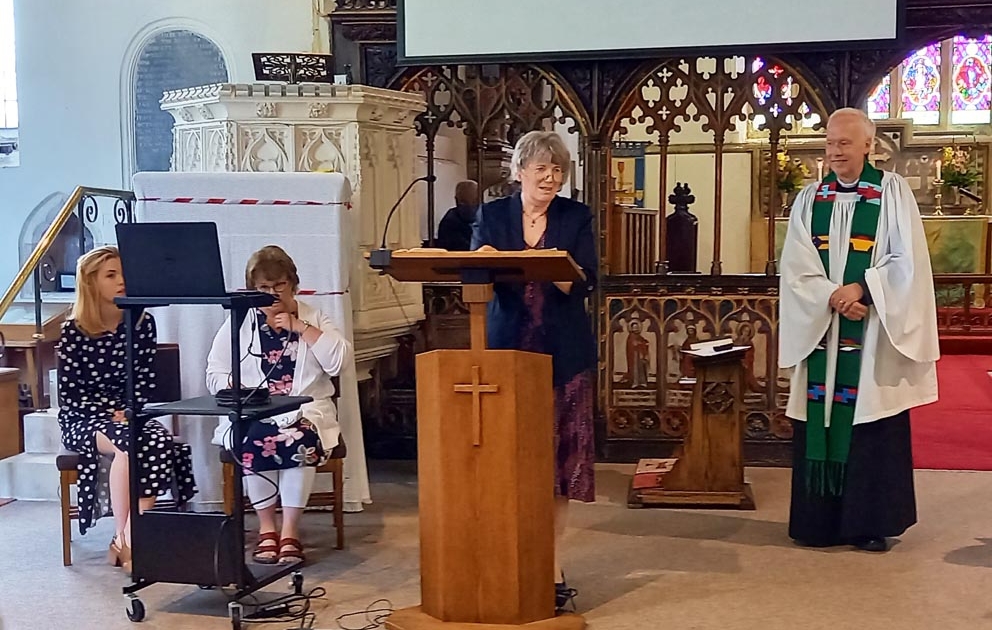 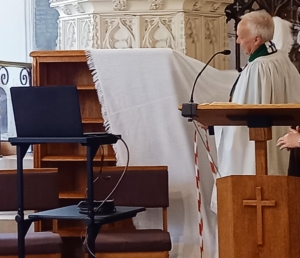 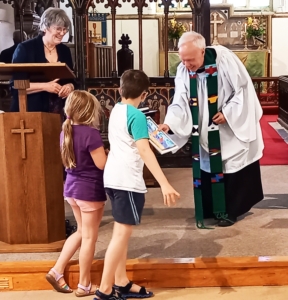 Clare Lillington expressed gratitude and appreciation on behalf of us all.

Paul pulled off the sheet, to reveal a bookcase made by Richard Pearce out of a surplus church pew 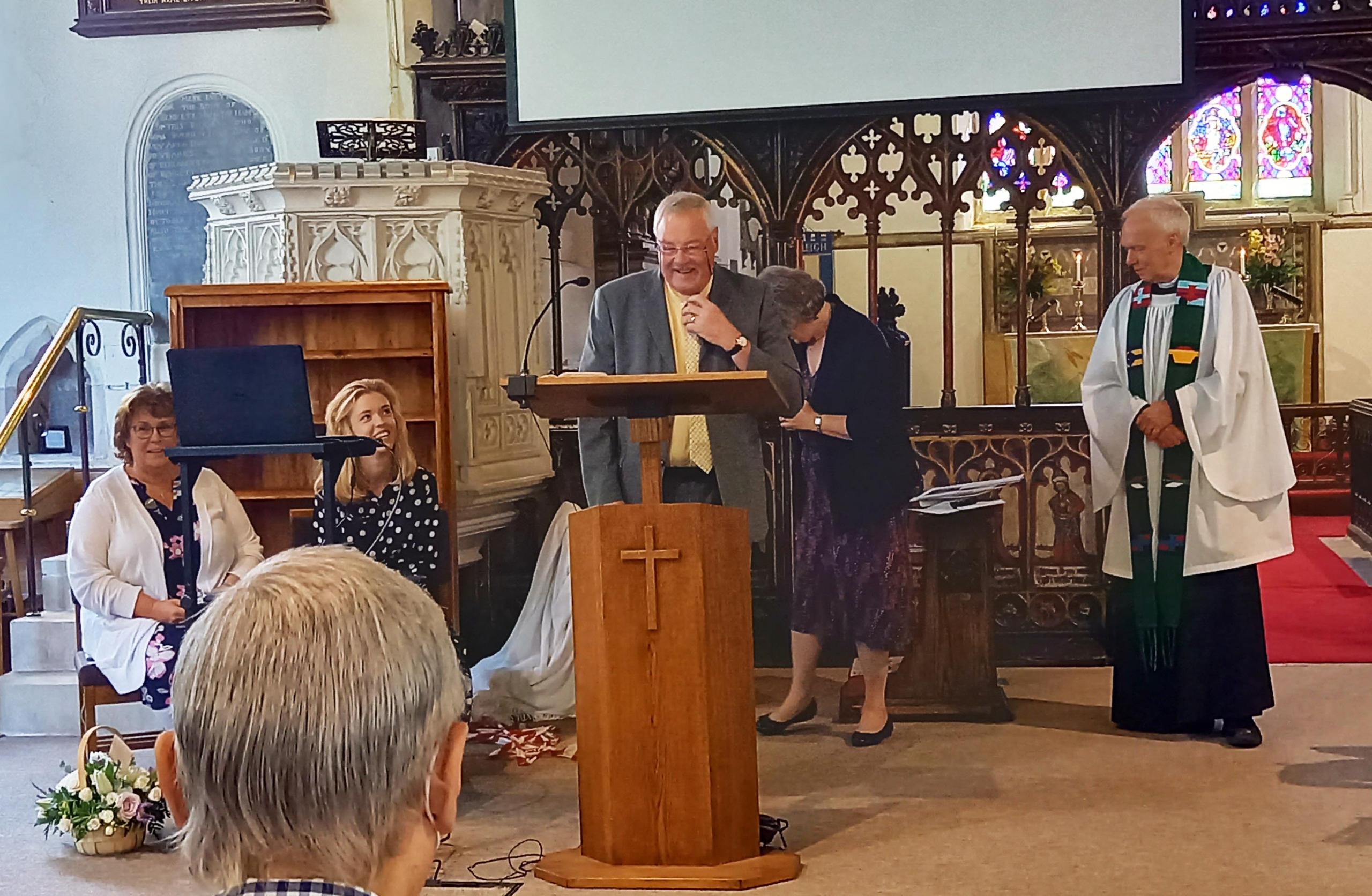 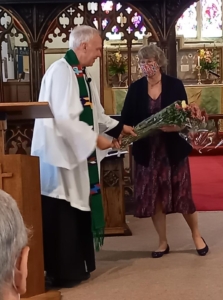 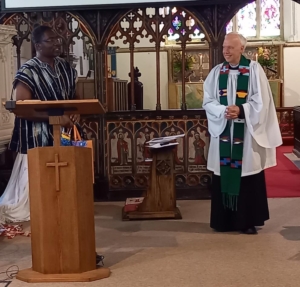 Paul had a presentation to make too – flowers to Clare, thanking her for all her hard work as Treasurer and Churchwarden